23/11/2018
Through 48 projects of demining, technical survey and land release projects, over 570 mines and more than 300 unexploded ordnance were found. 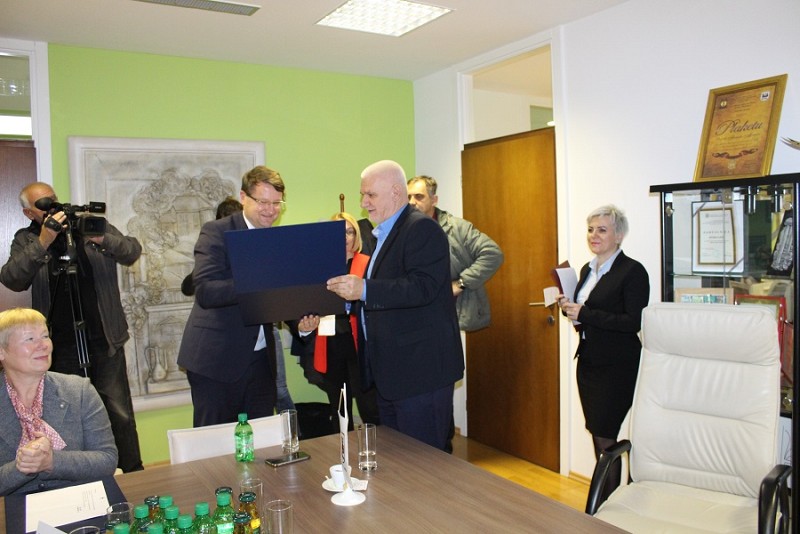 At the reception, hosted on 22nd of November in Ilidža, Sarajevo, Bosnia and Herzegovina (BIH), the Municipality of Ilidža declared its territory free of mines. The event is extremely important due to the fact that based on the 2001 data from Mine Action Center of Bosnia and Herzegovina (BHMAC) 17,400,000 square meters of territory in this municipality were contaminated.

The reception was amongst others attended by H. E. Zorica Bukinac, Ambassador of Slovenia in BIH, H. E. Christiane Hohmann, Ambassador of Germany in BIH, representatives of the Embassy of United States of America in BIH, Embassy of Italy in BIH, the Delegation of the European Union, Ambassador Tomaž Lovrenčič, Director of ITF Enhancing Human Security (ITF), and Mr. Saša Obradović, BHMAC director. Following the address of the Mayor Prof Dr Senaid Memić and the representative of the Ministry of Civil Affairs of BIH Mr. Suvad Džafić, Ambassador Lovrenčič addressed the gathered guests.

He emphasised that between 1998 and 2018 more than 3.5 million dollars were raised for the Municipality of Ilidža through ITF, with which over 8.1 million square meters of mine suspected and contaminated land were cleared. Through 48 projects of demining, technical survey and land release projects, over 570 mines and more than 300 unexploded ordnance were found. Ambassador Lovrenčič highlighted the Municipality of Ilidža as a great example of what can be achieved through humanitarian demining, support to demining activities and enhancing human security, and expressed the hope that other municipalities will follow its lead.

Through ITF the previously mentioned projects were financially enabled by the Muncipality of Ilidža, United States of America, Norway, Germany, the project Adopt a Minefield, Ministarstvo prostonog planiranja I okoliša Kantona Sarajevo and Belgium.

After the keynote addresses, the Mayor of Ilidža officially declared Ilidža mine free, and thanked the donor representatives and ITF for their generous help in achieving this feat.

BIH remains one of the most mine contaminated countries in the world, with still around 2% of its territory being mine suspected. ITF has been present in BIH since 1998. During this time more than 180,000 children and adults have received mine risk education programs, 875 mine victims have received physical rehabilitation at URI – Soča, over 5,000 mine victims from BIH have received psychosocial rehabilitation through sport and peer support, over 85 square kilometres of mine contaminated and mine suspicious land has been cleared and returned to the locals, and more than 5.000 mine victims have been involved in programs of social-economic assistance. For all projects in BIH, ITF has gathered over 200 million dollars.