The Government of the Republic of Slovenia is among major ITF donors. With regular yearly donations for ITF projects it has contributed more than 14 million EUR out of which over 5 million EUR was contributed through the Ministry of Foreign Affairs. Between 2021 and 2023, an additional amount of 1,160,000 EUR is allocated for the following projects:

The so-called Ukrainian crisis with its salient international implications, erupted in the aftermath of the 2014 Ukrainian revolution. In spite of the Minsk agreements, attempts to provide a peaceful resolution to the conflict, and a significant reduction of hostilities in certain parts of eastern Ukraine recently, the political and security situation remains uncertain and poses an immediate threat to human safety. These traumatic events cause severe psychological distress and negatively impact the mental health and psychosocial well-being of the most vulnerable group – children.

In order to address the needs of children affected and traumatized by the conflict in Ukraine, ITF is implementing a project for the enhancement of their psychosocial well-being.In the next two years, 142 conflict affected children facing trauma and other psychosomatic disorders will be included in intensive psychosocial rehabilitation programs at Debeli rtič, Slovenia. 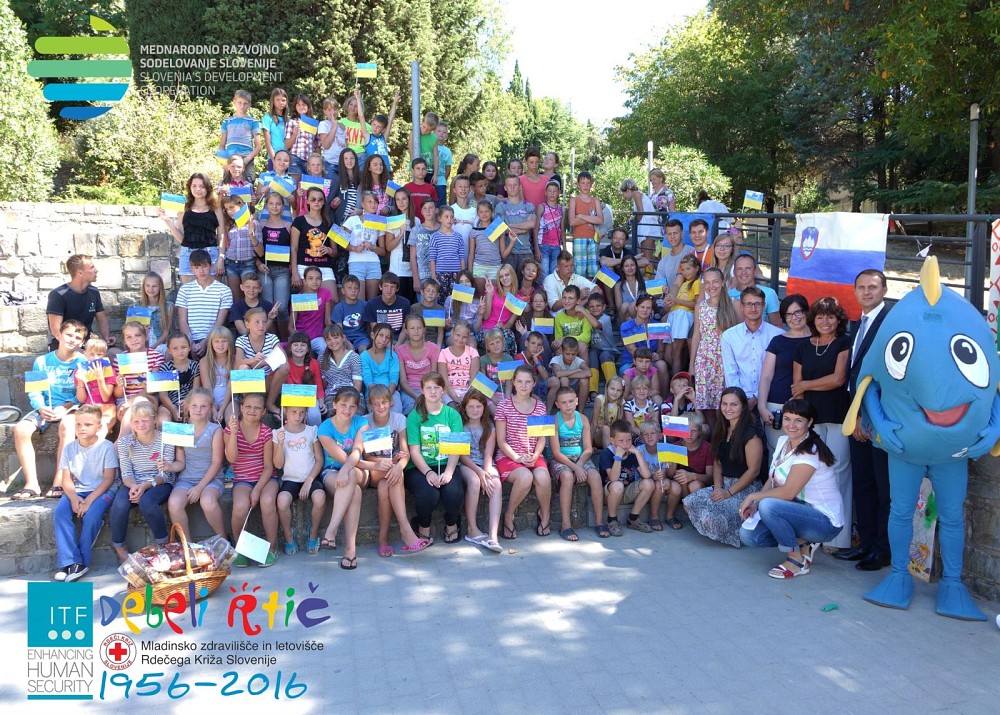 Medical Rehabilitation of a Victim of Armed Conflict in Ukraine

The so-called Ukrainian crisis having salient international implications erupted in the aftermath of the 2014 Ukrainian revolution. In spite of the Minsk agreements and attempts to provide a peaceful resolution to the conflict, hostilities continue to pose an immediate threat to human security. Although we have in the last few months seen a significant reduction of hostilities in certain parts of eastern Ukraine, the political and security situation still remains uncertain.

At least 10,225 people have so far lost their lives and 24,541 people have been wounded (out of which at least 182 children) in east of Ukraine according to the UNHCHR statistics, while actual numbers are likely to be higher due to severe unexploded ordnance contamination. Humanitarian situation is dire with many people struggling to satisfy the basic needs and with government struggling to provide medical assistance. In an exemplary case, ITF provided aid and physical rehabilitation to a girl who lost her left leg in 2015 during the conflict in Mariupol, Ukraine. So far, the girl has undergone five phases of medical rehabilitation and received a regular below-knee prosthesis and a secondary prosthesis to be used in water. However, due to her continuous growth, rehabilitation requires a sustainable and comprehensive approach in order to enhance her general health and well-being. This also helps lay the foundation for the long-term reintegration process. The project, which will continue in 2022, has been co-financed by the Republic of Ireland and private donors. 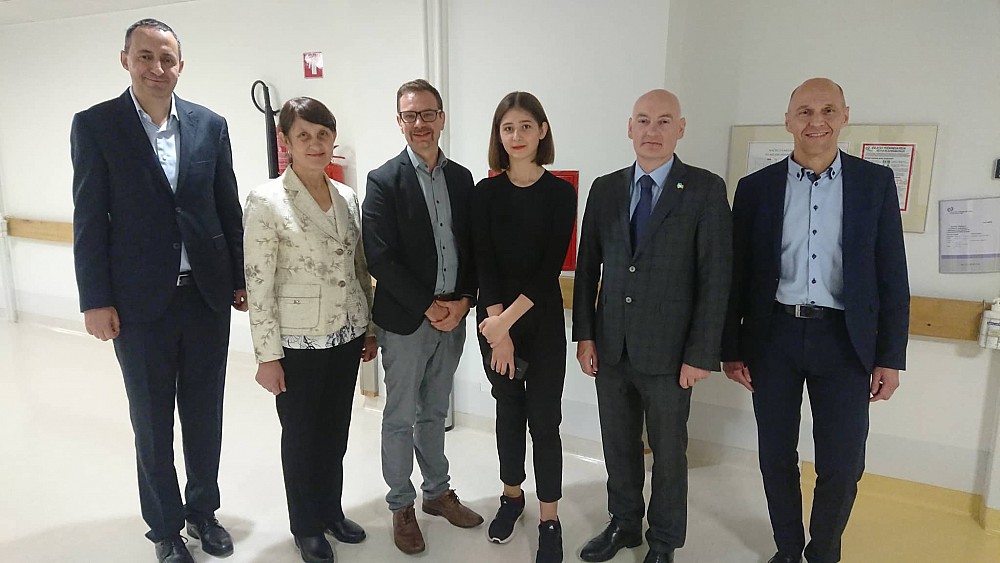 Support to Mine Detection Centre (MDC) Polyclinic in Kabul, Afghanistan

In the shadow of never-finished wars, Afghanistan remains one of the poorest countries in the world. 50% of the population lives 1 hour on foot away of the closest medical facility and 37% of the population lives 2 hours away. Based on statistical data, 74% of medical services must be paid for which demonstrates an issue of accessibility. Health issues are often associated with fertility, with an extremely high birth mortality rate. In addition, transmitted diseases account for half of all deaths in Afghanistan.

The project of supporting the MDC Polyclinic in Kabul started in 2016 and in the last few years has been co-financed by the Republic of Korea. It enables free healthcare support to deminers and their families as well as the population of Kabul. The care includes physiotherapeutic, gynecological, and dental services as well as examinations and consultations. During 2020, more than 13,000 physiotherapeutic, gynecological, and dental services were provided to Kabul citizens. Additionally, radiological, laboratory and pharmaceutical services were provided. The project specifically focuses on services for women and children who cannot afford healthcare. MDC Polyclinic successfully adapted to  work under the COVID-19 epidemic conditions.

In the next two year period, over 15,000 gynecological and dental servicesare planned to be provided to the most vulnerable Kabul citizens through the support of Republic of Slovenia.

Since 1948, generations of residents in Gaza Strip and West Bank have been subject to repeated conflict and displacement. Thousands of civilians were injured during the conflicts, with the large majority of children/young adults especially in Gaza Strip. Although the physical and medical rehabilitation system has been developing through the years in Gaza Strip and West Bank, injured persons, especially children, were still unable to benefit from proper treatment and the use of medical devices. Families are constantly under strain and  repeated traumas without allowing the time for a proper recovery process to take hold.

The current project co-financed by the Republic of Korea, is primarily aimed at activating human resources for physical rehabilitation and psychosocial support of people in Gaza Strip and West Bank. It will contribute to professional skills of experts in physical medicine and rehabilitation and educate and empower them for providing psychosocial support to their clients. In addition, it will activate resources for assistance to children and other persons in need by educating and empowering mentors -  school teachers and NGO workers for development of voluntary work of youth and implementation of school based and community based voluntary activities of youth. 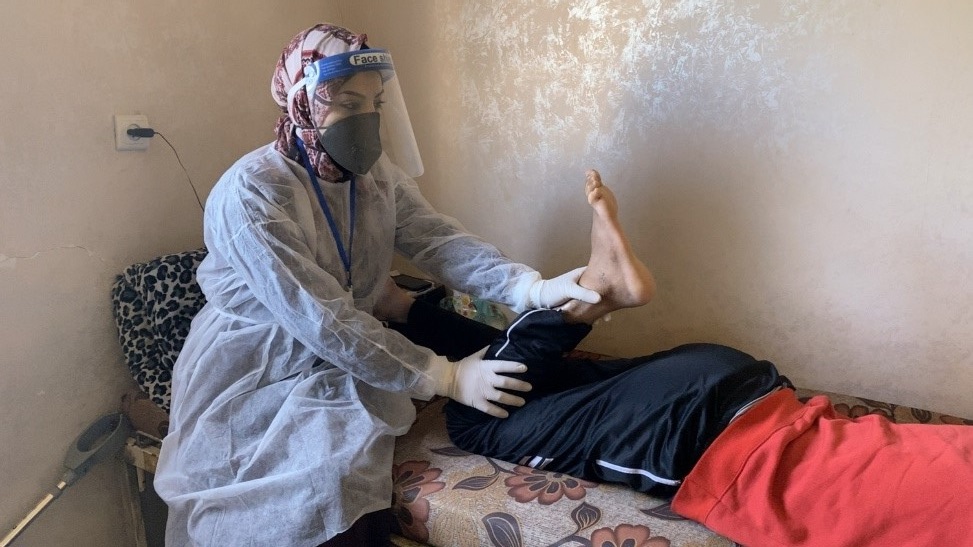 The latest UNHCR data shows that Jordan is host to 659,673 registered Syrian refugees (about 2,200 less than in the same period one year ago) and that in addition to Turkey, it is the country with the largest number of refugees per capita in the world (89 refugees per 1,000 inhabitants). An indirect consequence of the armed conflicts in Syria is the extensive contamination of the areas with mines, ERW and other unexploded ordnance. ERW contamination is one of the most urgent factors preventing and hindering the safe return of refugees to their home environment. With the recent voluntary repatriation of Syrian refugees, the needs for a safe return are more important than ever. The presence of COVID-19 pandemic in Jordan deteriorates the humanitarian situation even more and requires additional efforts to improve their livelihoods.

The aim of the two-year project in 2021 and 2022 is to raise awareness of the risks and dangers of mines/ERW, to promote safe behaviour among a target group of approximately 12,000 Syrian refugees, children and adults, living in Irbid Province, Jordan, and to minimise the number of potential victims of mines/ERW upon returning to their home country. In addition, Syrian refugees will also receive basic education on preventing the spread of infectious diseases (COVID-19). 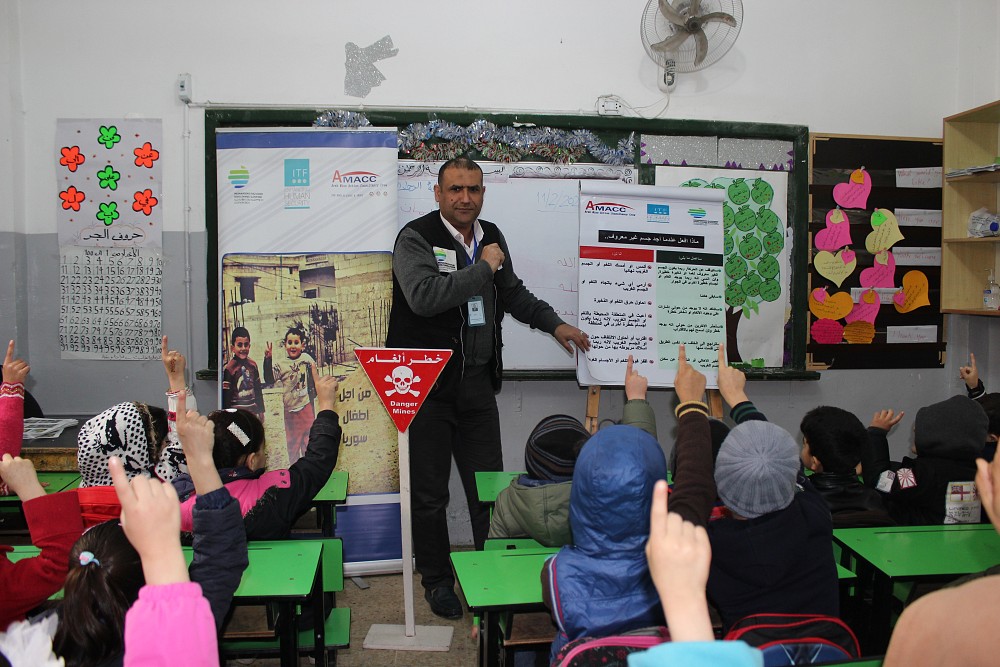 Medical Rehabilitation of Children from Belarus

Chernobyl is infamously marked as the worst nuclear accident in history. The radioactive particles from the explosion in 1986 still present a serious health risk to the lives of many people. Medical estimates suggest up to 4,000 people will die prematurely due to radiation exposure and thousands more still suffer health effects, primarily in today’s Russia, Ukraine and Belarus.

ITF, on the basis of agreement between the Governments of Belarus and Slovenia and in cooperation with the Slovenian Red Cross, has been implementing a medical rehabilitation project for 60 Belarusian children aged from 7 to 14 years that have suffered consequences of radiation as a legacy of the 1986 nuclear accident in Chernobyl. Since 2015, 179 children received comprehensive medical rehabilitation in Slovenia through ITF. In the 2021-2022 project period 60 children will attend and complete the medical rehabilitation program containing inter alia respiratory physiotherapy, hydrotherapy, and a rich educational and social gathering program that improved their health as well as their general well-being. 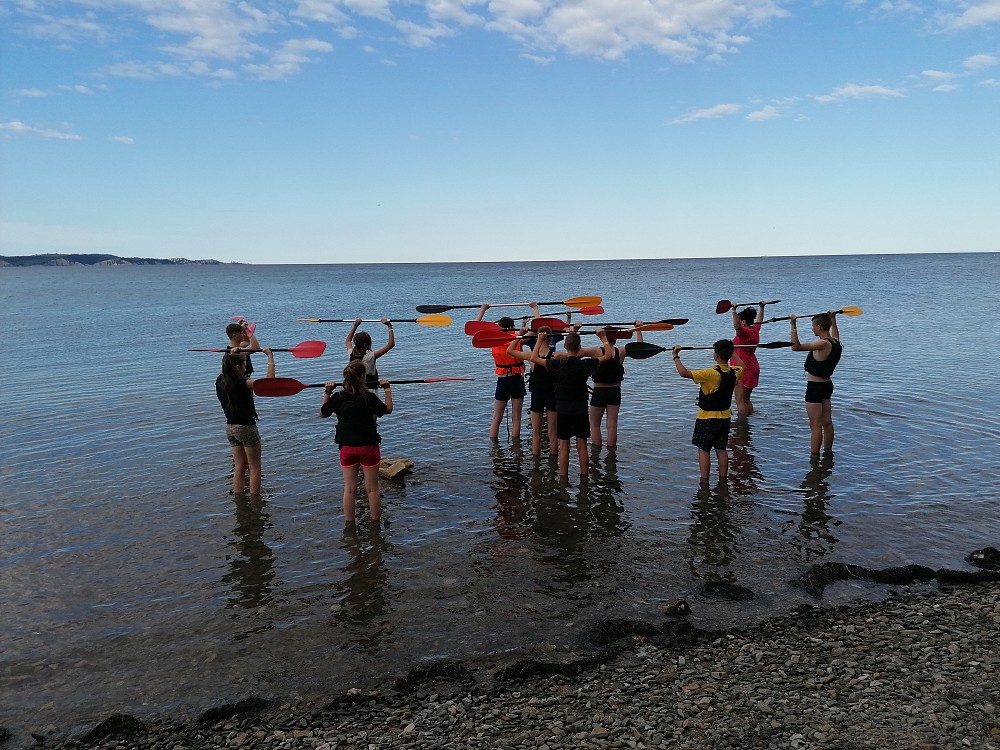 Support of ITF Representative Office in Bosnia and Herzegovina (BIH)

The ITF Representative Office in BIH has been active in-country (BIH) since 1999 by supporting the national mine action strategic goals through implementation of ITF’s mine action humanitarian mission. This mission is executed through a combination of demining, raising mine/UXO contamination awareness, mine/UXO victims' assistance, rehabilitation and national capacities' support. In addition, ITF's activities also include evaluation, monitoring and communication as well as coordination with the donors/embassies and BIH institutions. 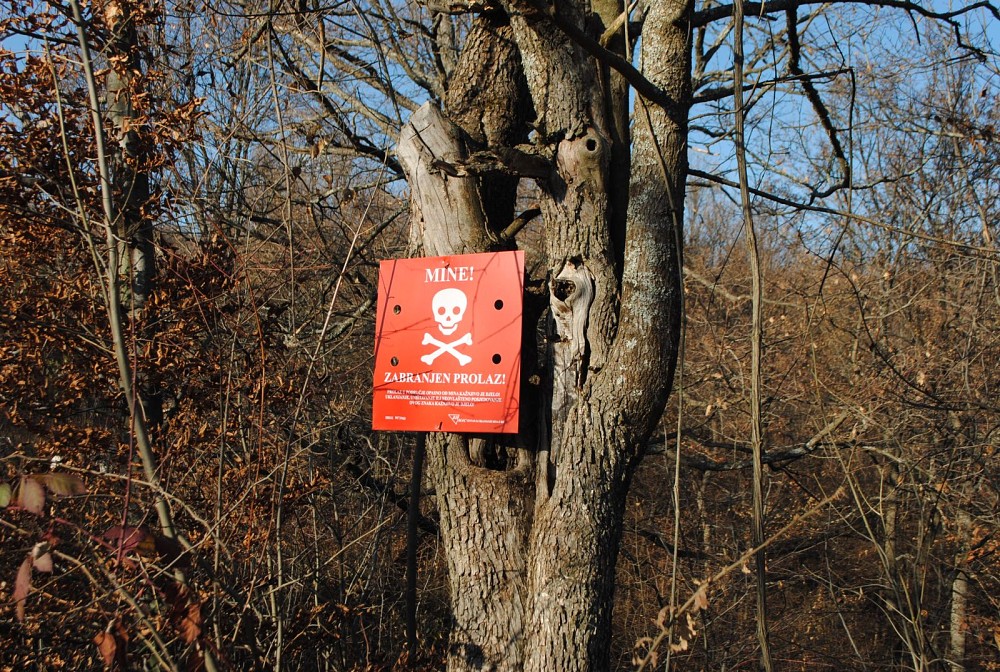 School and Peer Mediation in Bosnia and Herzegovina

The peaceful settlement of disputes is key at preventing conflicts on both an international and personal level. The aim of the project is to empower teachers and peers to independently solve conflict situations and thus strengthen tolerance, communication and equality.

In period 2019-2020, ITF continues with the third phase of the project planning a cooperation with 24 elementary schools from the municipalities of Brčko, Gračanica, Tuzla, Doboj, Derventa, Brod, and Mostar. Approximately 70 teachers are planned to participate in the project attending seminars for school mediators and a train-the-trainer program. An overall of 288 pupils is foreseen to be trained for peer mediators. 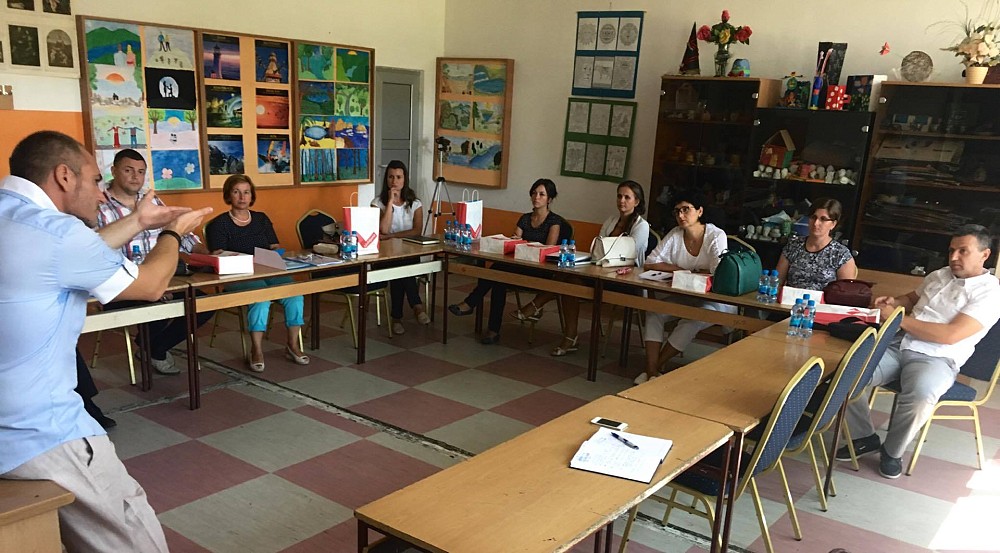 A decade since the start of war in Syria, humanitarian needs throughout the country remain highly complex, and are even increasing on account of the pandemic and the deepening economic crisis. With this project, ITF aims to support the stabilization in Northeast Syria by helping improve overall security, livelihoods and food security in areas affected by explosive hazards contamination. Through its programming in the Al Hasakah Governorate that is considered the breadbasket of Syria, where fields, pastures and orchards are frequently contaminated by explosive hazards and therefore not used, ITF will be supporting local economy and community resilience. ITF intends to adopt a two-phased approach; firstly, the goal is to enable safe access of farmers and shepherds to agricultural land, and secondly, the goal is to follow-on by supporting agricultural revival through the provision of technical assistance, agricultural inputs and/or know-how. Implemented in 2021 and 2022, this project will build on a complementary initiative ITF has been carrying out with support from the Austrian Development Agency since 2020.

Addressing the Needs of Vulnerable Groups in Lebanon

The Syrian crisis has increased Lebanon's population by 28% in less than five years, contributing to the already severe socio-economic situation and putting serious pressure on already overburdened public services and host communities, including health and education services and access to employment. Lebanon currently hosts about 1.5 million refugees, mostly from neighboring Syria (UN / Government of Lebanon). This situation was further exacerbated by this year’s explosion in the Port of Beirut with devastating health, psychological and material consequences. Vulnerable groups in Lebanon (including mine/ERW victims, victims of the Beirut explosion, Syrian refugees) urgently need long-term support, while the current COVID-19 pandemic is heavily overloading health services in the country.

The project addresses the urgent health, psychosocial and economic needs of 185 vulnerable individuals in Lebanon to help improve the overall quality of their lives and facilitate their reintegration into social, political and economic life.

@ITFsi: Pleased to be sharing ITF’s experience of humanitarian mine action in conflicts and discussing future strategies of… https://t.co/D5310bxX5D
@ITFsi: [#SYRIA] Different types of explosive hazards affect over 11 million Syrians. To prevent tragic accidents, our risk… https://t.co/X2OiruZ8zY
*The designation Kosovo is without prejudice to positions on status, and is in line with UNSC 1244 and the ICJ Opinion on the Kosovo declaration of independence.