20/05/2021
On the occasion of the official visit of Minister of Foreign Affairs of Japan H.E. Mr. Toshimitsu Motegi to Bosnia and Herzegovina, ITF Director Tomaž Lovrenčič signed a Donation Agreement with the Ambassador of Japan H. E. Makoto Ito. 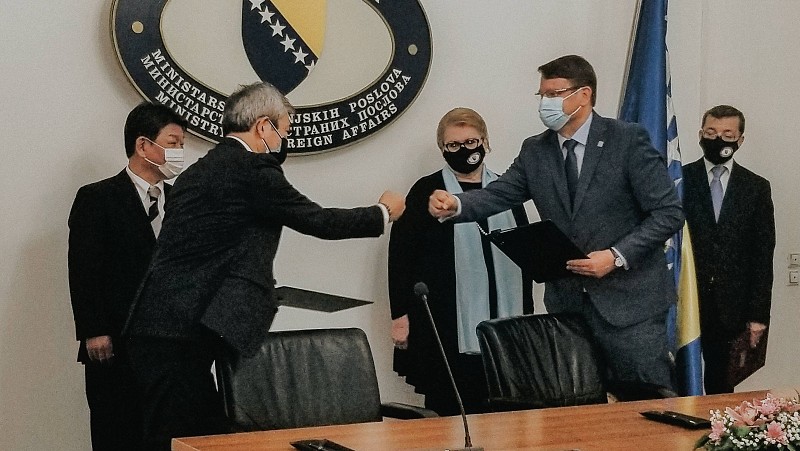 Japan was one of the first partners who supported ITF project activities in Bosnia and Herzegovina (BIH) and contributed to our mission back in 1999. Thus far, the Government of Japan has donated more than 3.8 million euros for various mine action project activities in the country through ITF. With their support we have cleared almost 2.68 km2 of land, removing 633 explosive items (280 mines and 353 unexploded ordnance (UXO)) on 80 different locations in the country.

Due to Japan’s generous donation of 389,150 euros, 11 mine clearance project tasks in the Municipalities of Donji Vakuf, Bihać, Foča, and Doboj will be implemented, ensuring a safe environment for the residents as well as creating safe preconditions for local development.

As a result of the war in Bosnia and Herzegovina 20 years ago, the country continues to suffer one of the most severe land mine problems in the world. Continuous mine action activities in the country already made a significant change. In 1996 the mine suspected area in the country covered 4,200 km2, and in 2021 it is estimated that the current mine suspected area is 960 km2. The importance of demining processes is much more profound, as they substantially impact the local communities. A safe, clean, healthy, and sustainable environment is integral to a full enjoyment of a wide range of human rights. In the cleared areas, the citizens can now finally walk freely and safely, and use the cleared land for agriculture, grazing animals, building houses, and other public facilities that will help restore the economy and everyday life of people living in affected regions.

We at ITF are grateful to the Ministry of Foreign Affairs of Japan for their financial support for the last 22 years and for enabling a safer environment for residents of Bosnia and Herzegovina. Due to their generous donation, we are one step closer to achieving our final goal and clearing Bosnia and Herzegovina from land mines in its entirety. 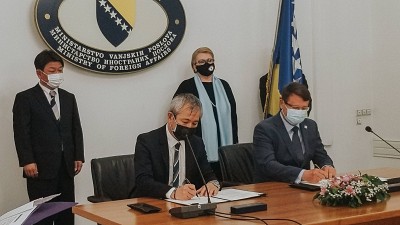 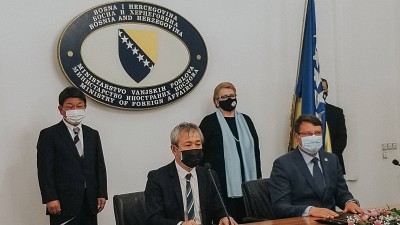 DONATE
@ITFsi: This week we are in Prague at the #EUSpace, organised by @EU_Commission, @EU4Space 🌌 and @EU2022_CZ 🇨🇿. We’re expan… https://t.co/DHBnkaBb8d
@ITFsi: 🦒 Today’s #WorldAnimalDay 🦊 aims to improve their status and welfare as sentient beings with feelings and sensation… https://t.co/k0Goric3QY
@ITFsi: Thanks to the support provided by the @StateDeptPM 🇺🇸 the Quality Assurance and Quality Control (QA/QC) of West Ban… https://t.co/djLhtdBVoU
@ITFsi: Today, #ITF and @CzechMFA 🇨🇿, one of our most consistent donors, signed a new Memorandum of Understanding in suppor… https://t.co/TZH0dmtPpM
*The designation Kosovo is without prejudice to positions on status, and is in line with UNSC 1244 and the ICJ Opinion on the Kosovo declaration of independence.