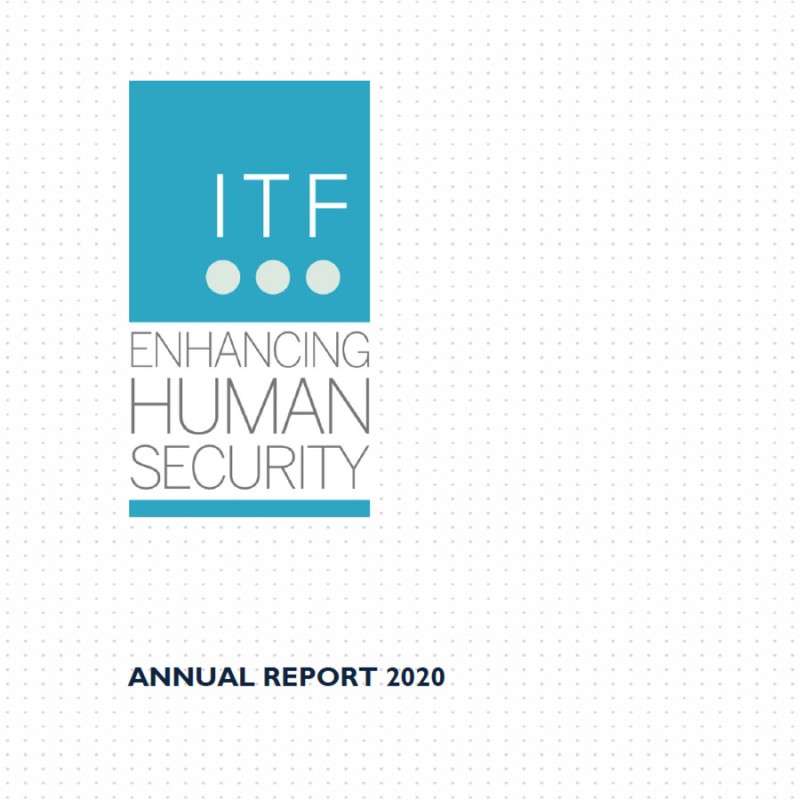 As we report on our activities in 2020 our endeavour does not stop here, as we continue to work tirelessly in helping people and communities around the world in a variety of areas pertaining to human security. In 2020 alone, we raised over 9 million USD in donations and operated in 15 countries and regions addressing the threats to human security. We cleared over 6,3 million square meters and found and destroyed nearly 2,900 mines and UXO. In 2020, over 53,000 people received risk education messages and over 11,000 people received Covid-19 health education. Over 410 vulnerable individuals and their families received Covid-19 support in terms of food and hygiene care packages.

As we report on our activities in 2019 our endeavour does not stop here, as we continue to work tirelessly in helping people and communities around the world in a variety of areas pertaining to human security. In 2019 alone, we raised over 15 million USD in donations and operated in 17 countries and regions addressing the threats to human security. We cleared over 5 million square meters and found and destroyed nearly 6,000 mines and UXO. In 2019, over 13,500 people received risk education messages and over 94 children received psychosocial or medical support. 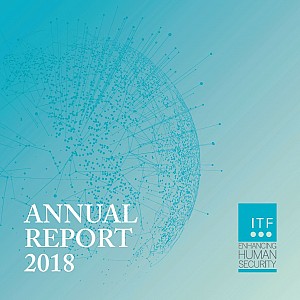 As we report on our activities in 2018, we are closing the successful chapter of ITF's 20th anniversary. Yet our endeavor does not stop here, as we continue to work tirelessly in helping people and communities around the world in a variety of areas pertaining to human security. In 2018 alone, we raised over 25 million USD in donations and operated in 18 countries and regions addressing the threats to human security. We cleared over 6.5 million square meters and found and destroyed over 18,500 mines and UXO. In 2018, 44 mine/UXO survivors received assistance in the form of physical rehabilitation. 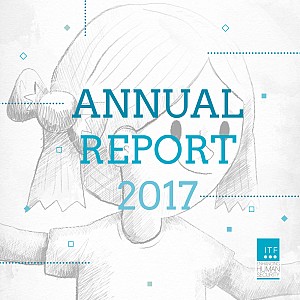 As we report on our activities in 2017, we already marked the 20th anniversary of tireless work in helping people and communities around the world in a variety of areas partaining to human security. In 2017 alone, we raised over 30 million USD in donations and operated in 21 countries and regions addressing the threats to human security. We cleared over 7.5 million square meters and found and destroyed over 10,000 mines and UXO. In 2017, 26 mine/UXO survivors received assistance in the form of physical rehabilitation. 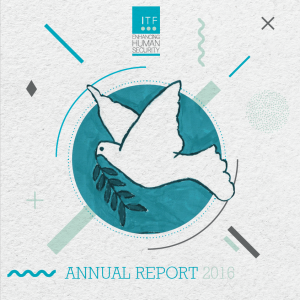 ITF Enhancing Human Security (ITF) had an exceptionally busy and demanding 2016. Primarily, we will remember the past year for passing a remarkable milestone in our institutional history and reaching 400 million USD in implemented donations. Even though our initial mandate was geographically limited to Bosnia and Herzegovina, we have employed these funds over the past 19 years for the benefit of over 30 countries, territories and regions. In 2016 alone, we helped individuals, communities and institutions in 18 countries, territories and regions. 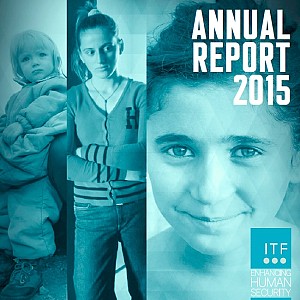 Throughout the years ITF’s has evoluted from an organization dedicated to the eradication of landmine problem in South East Europe to a versatile and multifunctional institution not only confined to its primary task of demining in Bosnia and Herzegovina. Although the mission of demining in Bosnia and Herzegovina remains high on its priority list, ITF has gradually broadened the scope of activities from mine clearance, mine victims assistance and mine risk education to stockpile destruction, physical stockpile security management and emergency activities related to the latest refugee crisis that has been unfolding – particularly in South East Europe. 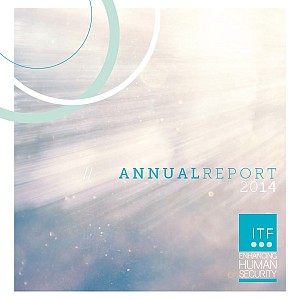 ITF Enhancing Human Security continued with the implementation of its goals in the field of human security. Despite unstable economic situation in the international community and continued austerity measures within the donor states in the year 2014. ITF has managed to achieve a raise of overall donations, which gives us a positive perspective for our forthcoming activities. 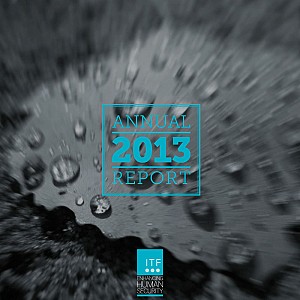 In 2013, ITF has raised over 15,5 million USD of donations. Within second Strategic Goal, more than 4,4 million of various types of ammunitions were destroyed in Bosnia and Herzegovina and Montenegro. 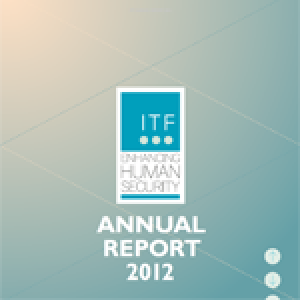 In 2012, ITF started to use the changed name - ITF Enhancing Human Security and revised whole graphic design together with logo. Although with the new purpose, name and graphic design, ITF continued to provide a cost-effective and value added approach for its stakeholders as a flexible, result oriented, professional and dedicated organization.

In 2011, International Trust Fund for Demining and Mine Victims Assistance has started with the turning point in organisation's history - the procedure to become an international organization and to change its name into - ITF Enhancing Human Security. As international organization, it orients itself broader to the dangers on the post-conflict areas and to disruptive challenges that threaten the security of individuals and community. 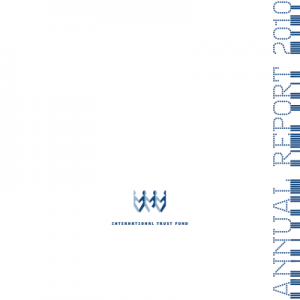 In 2010, over 28,3 million USD of donations were raised and more than 6,9 million m2 of land, contaminated with mines, UXO and cluster munitions were cleared in the region of SE Europe. In all, 34 projects in the field of victim assistance and risk education were implemented with additional two regional trainings carried out. International cooperation has been broadened in 2010 with ongoing cooperation with Cyprus, reinforced efforts in Colombia and links established with Egypt. 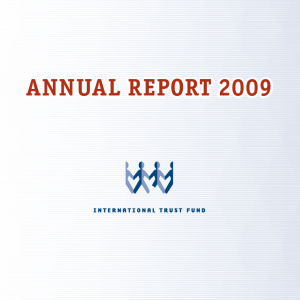 Despite the fact that ITF’s fund raising was aggravated by economic crisis, it was still able to collect a respectable amount of donations. This year ITF adopted new strategy for period 2009-2013 due to growing need to address also other post-conflict and disruptive challenges that pose a potential threat to human security just as serious as the danger from landmines and UXO. In 2009, Albania as the second country in SE Europe declared its mine free status and thus fulfilled its obligations of Article 5 of Ottawa convention. In addition to this, ITF concluded a demining program in Serbia, ongoing since 2003. 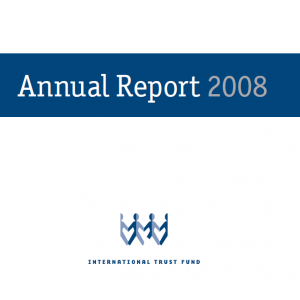 In 2008, ITF celebrated 10 successful years of work and in this year ITF achieved following accomplishments: raised almost 34 millions of U.S. dollars, over 35.000 children and adults were directly included in mine risk education projects, 10.993.953 m2 of lands in SE Europe were cleared, 53 percent of humanitarian clearance program in Bosnia and Herzegovina funded, 48 public and private donors supported mine action related activities. 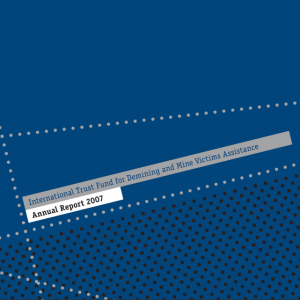 By signing Memorandum of Understanding (MoU) with United Nations Mine Action Service (UNMAS), an additional momentum for collective efforts in the field of Mine Action on global level came into being. Other aspects of the consolidated ITF international involvement may be observed through the signed MoU with Columbia and establishment of new regional initiatives such as regional rehabilitation training program for South Caucasus and Central Asia. In March 2006, ITF Managing Board adopted a document, which outlines the strategy of ITF in the period 2006-2009. Since 2001, continuous and considerable efforts of ITF, international community and national mine action authorities resulted in removing mine threat in Macedonia which declared its mine free status in September 2006 and thus fulfilled its obligations of Article 5 of Ottawa convention. In 2006, Zero Victim Target was achieved in North East Albania. 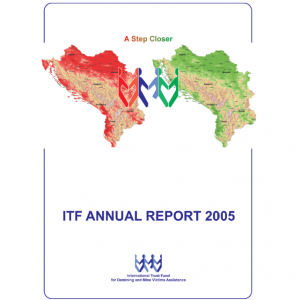 In 2005, the ITF funded some 50% of the demining program in Bosnia and Herzegovina, app. 20% in Croatia, 75% in Albania and over 50% in Serbia and Montenegro (incl. Kosovo*). The overall number of new mine victims in SE Europe fell under 100 per year due to extensive mine clearance and risk education programs. Since 2002 ITF established recognizable role in the regional mine action initiative also in South Caucasus region, thus making small but important steps in contributing its share to addressing mine problem also in other mine affected regions . 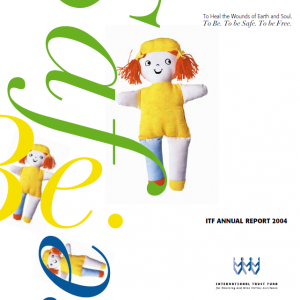 By 2004, ITF has established flexible and well running Project Management capacity, which has been reflected in first 1.000 successfully implemented mine/UXO clearance projects. With an aim to enhance the productivity of clearance operations, a New Clearance Methodology in SE Europe was introduced. The method is an important part of the clearance process, by providing the information needed for safe, effective, and efficient mine clearance. Among the countries that are active in mine-action activities, Slovenia (in cooperation with ITF) appealed to the first Review of 'Ottawa' Convention. 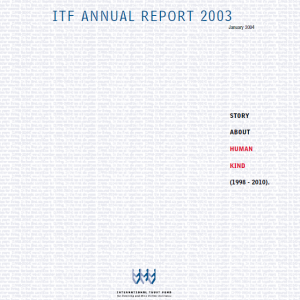 In 2003, ITF facilitated the clearance of nearly 8 million m2 of mine/UXO contaminated land in Albania, Bosnia and Herzegovina, Croatia, Macedonia and Serbia and Montenegro, always in close co-operation with international and local authorities. Altogether, more than 23 million USD were raised and ITF launched new webpage featuring a user-friendly interface to provide interested stakeholders, especially the donor community, with all the necessary information. 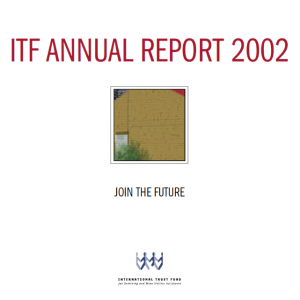 In 2002, ITF became a member-observer in the Mine Action Support Group, a coordinative donor community body; ITF also developed fruitful cooperation with UN family. One of the most distinguished features of year 2002 was characterized by surpassing the threshold of 100 million $US of cumulative donations raised since 1998. 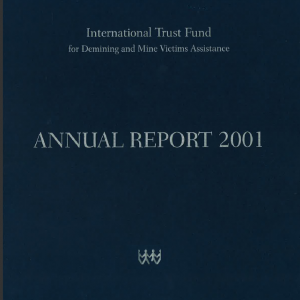 ITF supported first mine awareness program in Kosovo*. ITF took part when Geographical Information System (GIS) was launched and it helped to manage the systems’ activities. ITF, together with the American Chamber of Commerce in Slovenia, the Embassy of Canada and the Embassy of the United States, has been a part of organizing a First Night of Thousand Dinners®. 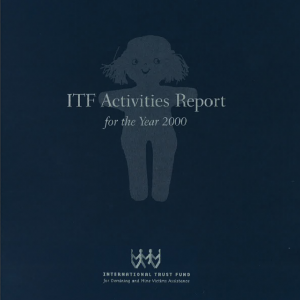 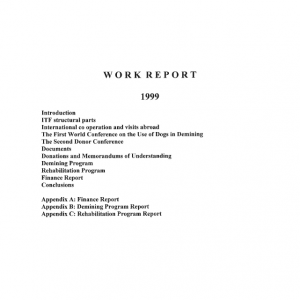 ITF successfully introduced tendering system in Bosnia and Herzegovina for mine clearance what contributed to cost decrease. ITF also expanded its activities to Croatia and one of the major achievements was organizing the first world conference on the use of mine detection dogs (MDD). 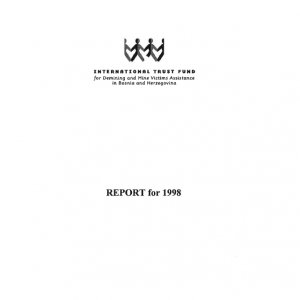 On 13th March 1998, Government of the Republic of Slovenia established ITF, a humanitarian non-profit organization to tackle challenging mine problem. Up until the end of 1998 3.7 million USD of donations have been announced.  Moreover, matching fund mechanism for South-East Europe was introduced whereby every dollar raised by the ITF is matched by additional dollar provided by the US government and thus the total donations raised this year amount to 7,4 million USD.